[German Edition]Yesterday Google released Android 4.0 Ice Cream Sandwich source code for the public. Android-x86.org also presented release candiate 2 (RC2) of their Honeycomb x86-port. Time for another testdrive on my Eee PC 701G and on my Netbook MSI Wind U100.

I've blogged already several times about Android on x86 systems (see my link list at the end of this text). Yesterday I visited the Android-x86 projec site and found RC2 of Android 3.2. I downloaded the .iso files for a testdrive.

I still own a Eee PC 701G from my first Netbook project (the machine still has a place in my "hall of fame" of valuable tech gadgets). Will Honeycomb run on such a machine, although Google told us that a Tegra2 platform is mandatory for Android 3.x? Also, some people explained to me, Honeycomb won't run on a machine with a desktop resolution of 800 x 480 pixel.

Because I'm a "guy born stupid and never learned a lot", I decided to give it a try. Connecting the USB tumb drive to my Eee PC 701 4G, pressing the on button, pressing the ESC key to show the BIOS boot device menu and then select my USB thumb drive as boot device was all what I did. 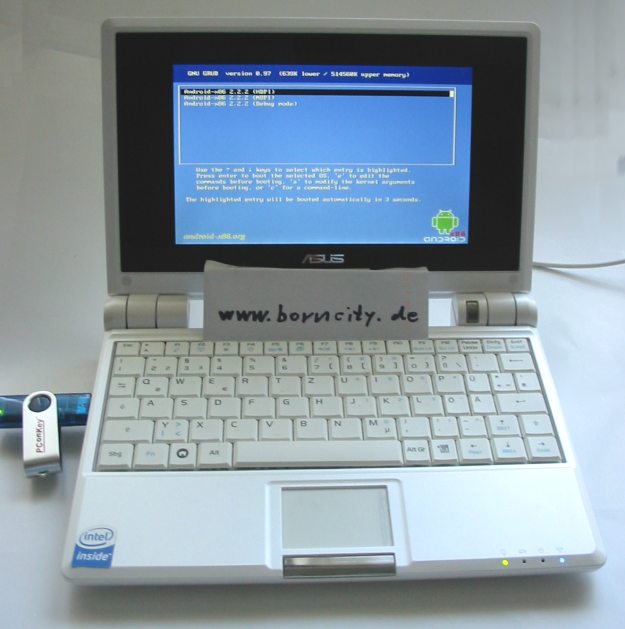 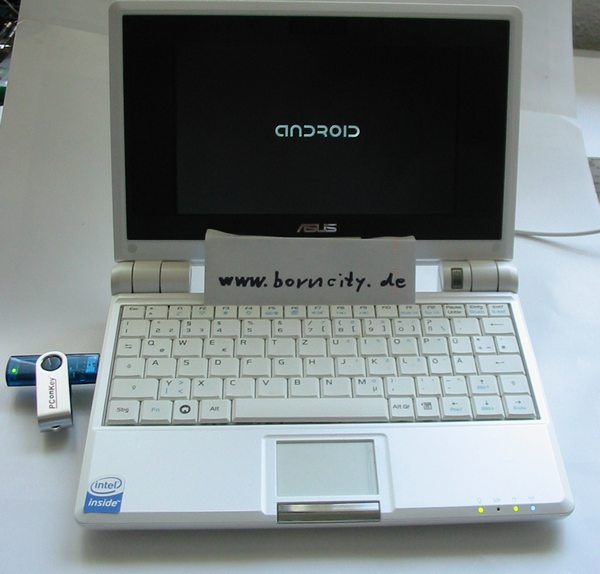 … and after a few seconds more, I was greeted by this image on my Eee PC 701G display. 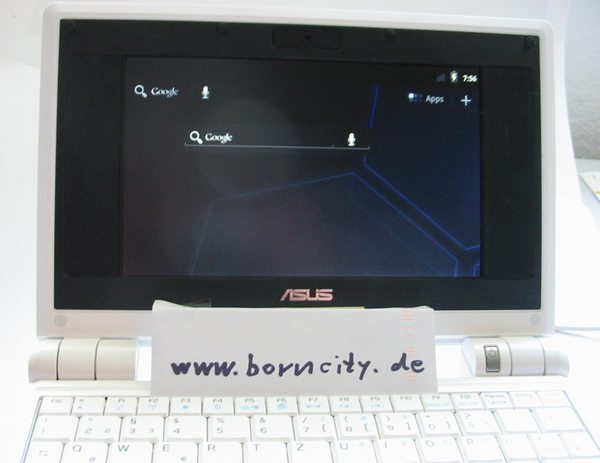 Wow, incredible – looks like Honeycomb, isn't it? The thing that should not work, because my Eee PC 701G still has online 800 x 480 – hey, and also a 600 MHz Celeron processor along with a simple Intel graphic unit is far away from a Tegra2 platform. But the image obove proves that Android-x86 will do on such a small machine. Below is my apps page. 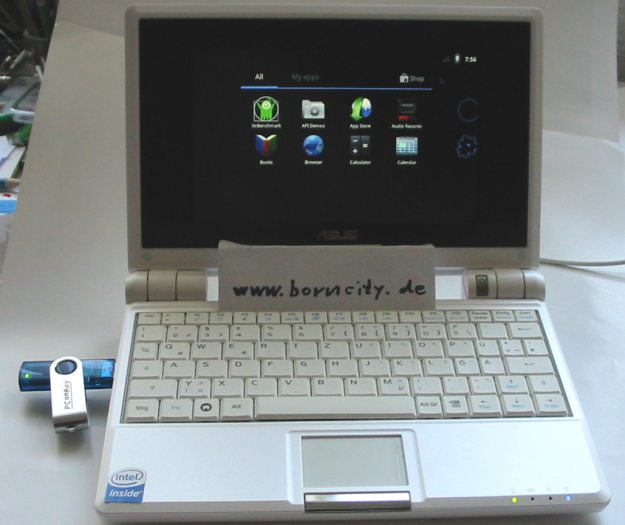 Using Android on my Eee PC 701G is fast, although the screen resulution isn't the best. Therefore the lower desktop part, containing the 3 Android Buttons for Home, Back e.g. isn't visible. But WLAN and audio output works out of the box, and I was able to use Apps. Only my web cam doesn't works and I was not able to chance some settings (for an external TFT display for instance). But I guess, owners of a Eee PC 1000 or successors will have fun, using the new Android x86 implementation.

For a 2nd test I used my MSI Wind U 100 (which was branded here in Germany as Medion Akoya 1210). It's a 10,1 Inch Atom-Netbook with 1 GB RAM I'm using for Windows XP, Windows 7 and Windows 8. But I have used this machine also for several Android and Linux test drives. Therefore I used my USB thumb drive with Eee PC live android. Just pushed the on button, then pushed the F11 function key to invoke the BIOS boot device menu. After selecting my USB thumb drive as boot device, I was able to launch Android Live system from the Grub menu. 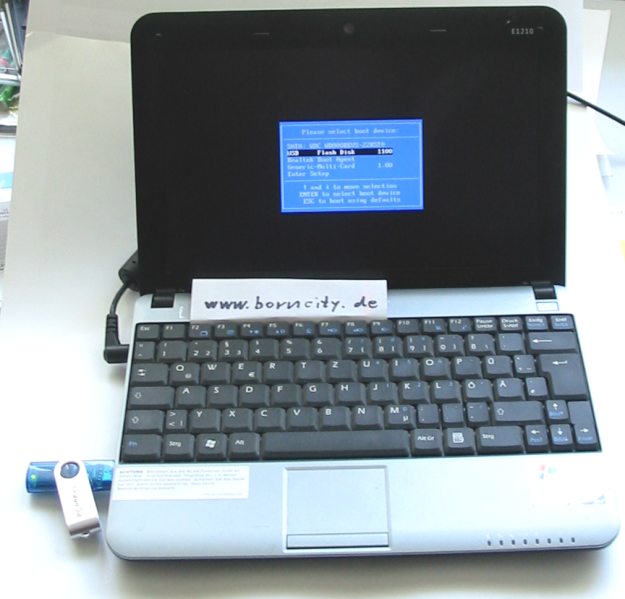 I've got a warning, that it isn't an ASUS machine, but who cares? After a few seconds I found my Honeycomb desktop on the display. 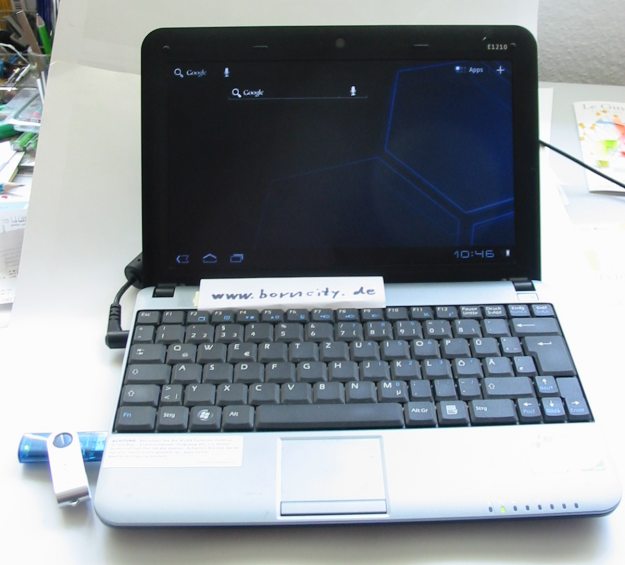 Using the touchpad was no problem and handling was really smooth. A WLAN access was set up after a few seconds (this runs now out of the box, what was not true for RC 1). The image below shows the Android apps page. 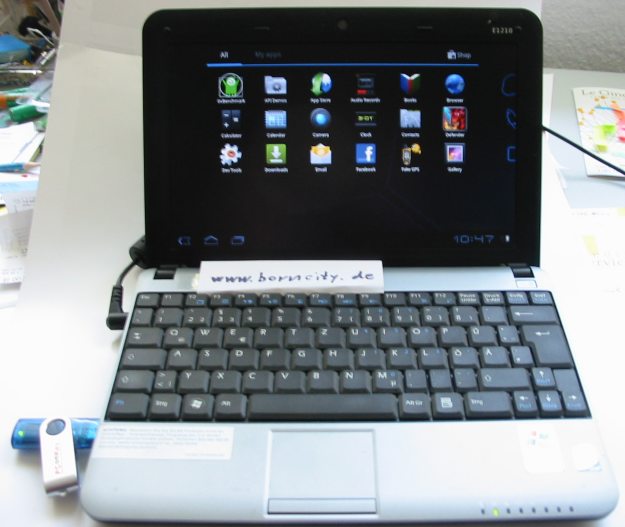 Only my web cam wasn't working, and also sound was not available. Then I bootet the 2nd USB thumb drive created from the Android .iso made for ASUS notebooks. Sound was working now (only the web cam app continues to crash). I was able to run a few Youtube clips. What won't work? I was not able to use a German keyboard layout. Also mounting a SD-Flash card wasn't possible (I haven't invested much time investigating this issue in detail).

What was hot? I was able to access my Google market account. Although it was a bit fuzzy, because of the english keyboard layout on my German keypad. Also invoking the market login screen turns the display to "portrait mode" causes me some trouble. But I managed it to enter my credentials and then I downloaded and installed Astro file manger. That was amazing, because I haven't mounted an SD card on my live system.

My conclusion: Android x86 3.2 RC2 isn't perfect, but it teased my appetite for more. I'm really eager to get my hands on a Ice Cream Sandwich port for x86, because Android 4.0 will be supporting different screen resolutions. In my view the current release of Android x86 is a big step forward. Unfortunately I haven't a slate for further tests (a WeTab tablet I borrowed for tests was retuned to vendor 4tiitoo a week ago). Otherwise I would have tested RC2 also on such a x86 slate.

Similar Articles (but in German):