[German edition]Microsoft is focusing on touch support for Windows 8 – mouse and keyboard are still supported, but won't play a major role at the metro user interface. So, the question is: Have we all switch to tablet PCs, all-in-one PCs and ultrabooks with touch screen to use Windows 8? Why not use the touchpad (trackpad) on existing netbooks or notebooks – and extend it with gesture support for Windows 8?

In retro perspective I'm asking me why notebook venders didn't use gesture control for Windows in past in a broader manner. If Windows 8 is touch based, why not extend a notebooks touchpad in a way, that it can act like a touchscreen? It should be no major issue, to implement swipe from left/right margin, swipe from top/bottom or pinch to to zoom. As modern notebooks comes with (huge) trackpads (touchpads), it might be no problem, to use swipe left from right touchpad border, to show the charms bar or swipe down to show the app bar. Apple users knows Apple Magic Trackpad since years. And this device enabled gesture support on Mac OS X and also on Windows (if the required drivers are installed – see links [1], [2], [6]). Here someone discussed a similar issue with uncovering a few insights.

Also we know some external USB-Trackpads for Windows-PCs (see the Amazon products shown above for example).

First I stumbled upon an article [3] written by Paul Thurrott, who mentioned, that Windows 8 will support gesture controls for trackpads/touchpads. Well, Paul isn't always accurate, Windows 8 won't contain gesture support for touchpads. It's more a driver issue (and drivers are supported by vendors). Also the guys at venturebeat.com [4] got obviously in touch with an engineering sample of a Windows 8 notebook, that supports touchpad gesture controls. And here [5] I found a forum thread, where somebody linked a video showing Windows 8 Release Preview with gesture control  This was the point, where I startet to search the web for "touchpad gesture control". I came across several websites, where people are discussing about this issue. And I noticed, that vendor Synaptics has announced trackpad gesture support for Windows 8 on Microsoft BUILD conference held last September. On this product page [7]  Synaptics presents a touchpad, which can detect up to 10 fingers. And at BUILD 2011 Synaptics released a press note about gesture control for touchpads [8]. Synaptics has also released a blog article discussing the gestures shown below. 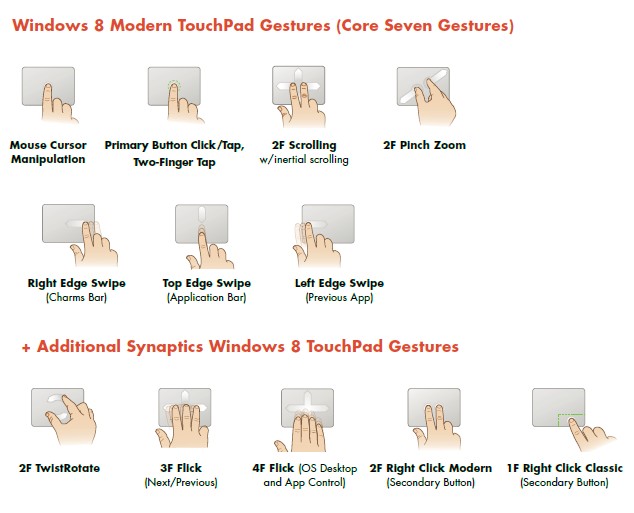 (Source: Synaptics) This document lists the requirements for touchpad gesture support in  Windows 8: Windows 8 SGS (Synaptics Gesture Suite) driver, a touchpad (ClickPad™) with Image Sensing-Technology and a InterTouch High Speed Interface. New notebooks will be shipped with this devices build-in. But what's about touchpads in existing notebooks? Well, I researched a bit further, and I came across web sites, where people wrote about experimenting with Synaptics drivers to support gestures.

Obviously, Windows 8 doesn't play a role, because thouse people are experimenting with gestures support for scrolling in Windows 7. The paper [10] for example, describes the Scrybe technology from Synaptics. Something similar can be found here. Also this article from Synaptics deals with touchpad gesture control and includes some videos that show what is possible with a driver and the Synaptics Gesture Suite ™ for TouchPad.

I then started experimenting with some drivers under Windows 8. On this Synaptics page [12] you can download the drivers and software for gesture control. There is also a link to the OEM's support pages, that might offer drivers for major vendors. At [14, 15] I found drivers that also suites for my MSI Wind U100 netbook. Overall I tested the HP drivers sp47815.exe, sp54239.exe and sp56811.exe on my Medion Akoya Mini 1210 (it's a MSI Wind U100). Also the MSI-FAQ-page [16] contains download links for Synaptics drivers.

The most recent version of synaptic driver is 16.1.6.0 – searching the internet, will bring up pages, where updated Synaptics drivers will be offered. While experimenting with these drivers in Windows 8 on a Medion Akoya Mini 1210 (identical to MSI Wind U100), I was able to unlock at least some functions. This may be done in the mouse properties page. Just invoke control panel and go to the mouse property page – below is the property page of my German Windows. 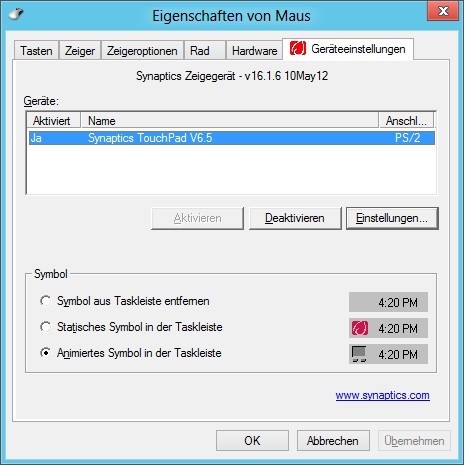 There should be a separate tab (like shown above) to control touchpad device settings. Just use the Settings button, to open the dialog box shown below. 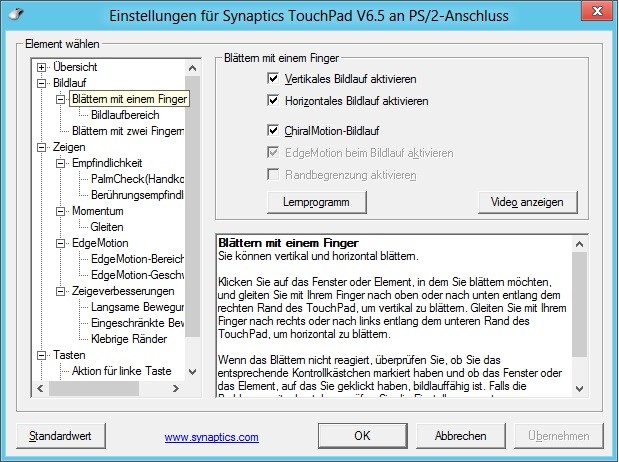 The content of the dialog box depends on the installed Synaptics driver version. But the dialog box should contain entries to enable or disable different gesture controls like two finger scrolling, ChiralMotion and so on.

I didn't found Windows 8 gestures like swipe from right – but I was able to unlock two finger scrolling. And this was an enhancement for Windows 8, because I was able to scroll the start page or within metro apps like photo, metro-IE. Also scrolling using the right or lower border of my touchpad was possible. I could not get pinch to zoom to work nor was swiping detected.

The best results I got with HP SP47815 (driver version 15.0.9 from 2010). I don't know, whether it's possible, to enable Windows 8 gestures on an old touchpad, using a modified .inf-file or a registry hack. My impression is, that it should be no major issue, to implement swipe or pinch gestures on old trouchpads, because all touchpads are coming at least with two finger support. Readme files and changelogs indicating to me, that the current Synaptics drivers might include these features.

My overall conclusion after experimenting with several driver versions: It showed me the potential of touchpad gesture control. And I feel, touchpad gesture support could be a major issue to a successful Windows 8 start, because it simplifies the user interface adoption on desktops and notebooks without touchscreens. I'm eager to see, how modern style touchpads and modified drivers are enhancing Windows 8. And, as far as I understood: Synaptics has plans to offer also an external USB-Touchpad to support Desktop systems.

10: Getting Multi-Touch on the TouchPad to Windows 7

13: How to use touch gestures on almost any notebook