[German]I still use an old Eee PC 701G for experimenting with Linux and Android. In the past I installed Android x86 2.2 on this machine. But since a Android 3.2 x86 port is available I was wondering, whether the Eee PC 701G still will be useable.

I have already proofed, that Honeycomb in a x86 port will boot in a Life version on a Eee PC 701G [3]. The steps to install Android x86 on a SD card are discussed here ([4, a]). But there was one problem: the Honeycomb desktop wasn't shown in full – the navigation buttons in the lower left corner was missing. And I wasn't able to access settings to enter the WiFi access code. So Android 3.2 was pretty useless on my Eee PC 701 G. First I thought it was a bug.

A comment in my blog indicated, changing the dpi settings will enable the navigation buttons on the desktop. But I could not use this idea, because I haven't had WiFi support (not possible to enter WiFi access key). So I couldn't install an app that helps me changing dpi settings. On the other hand Honeycomb runs well on my 10 Inch netbook – so I postphoned a solution. Last week I experimented a bit with Ice Cream Sandwich x86 port, that won't  boot on my Eee PC 701G (I discussed the reasons here [5]). During investigating this issue, I found a thread [b], that discussed, that settings are not accessible on Eee PC 701G.

How to change dpi settings during boot?

One sentence triggered my attention: I'd like to suggest DPI=120 you will get even better results – and someone proofed it Thank you guys, If I change the dpi parameters before every boot. Ok, changing the screen dpi settings will do the trick: Honeycomb desktop will be shown in full and settings page shall be accessable.

But how to establish that? After thinking and experimenting a bit I found a solution. After I installed Android x86 3.2RC2 Honeycomb on a SD card, I bootet the machine. In the Grub boot menü (see below), we may press key e to enter edit mode and show the Grub command. Pressing e a 2nd time brings you to edit mode. 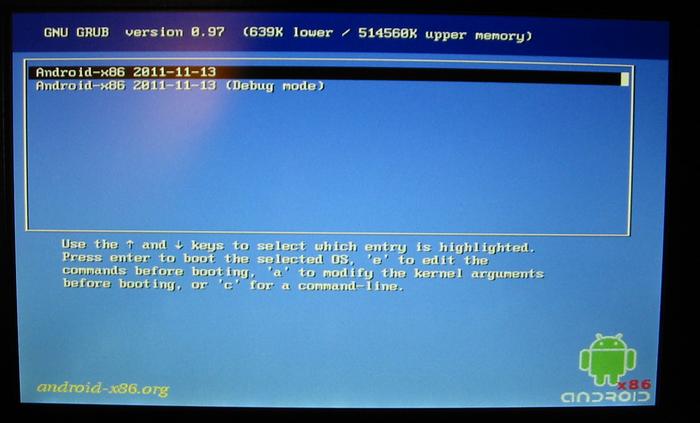 Now it is possible to navigate to the end of the grub command shown below and add DPI=120 (the command is case sensitive!). The enter key exits the edit mode. 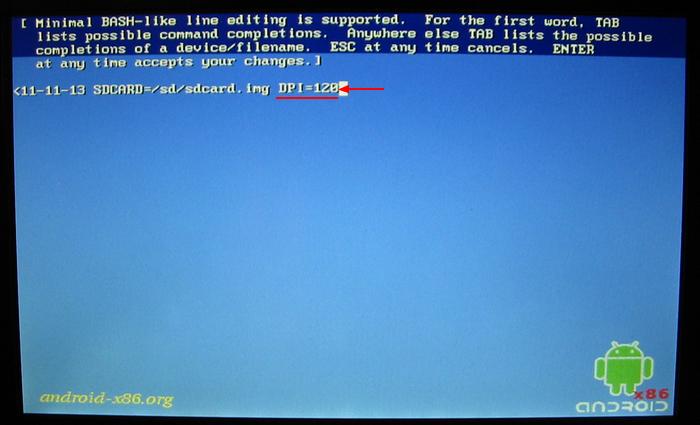 Press the key b to boot Android, and after a few seconds, you should be greeted by Android lock screen. 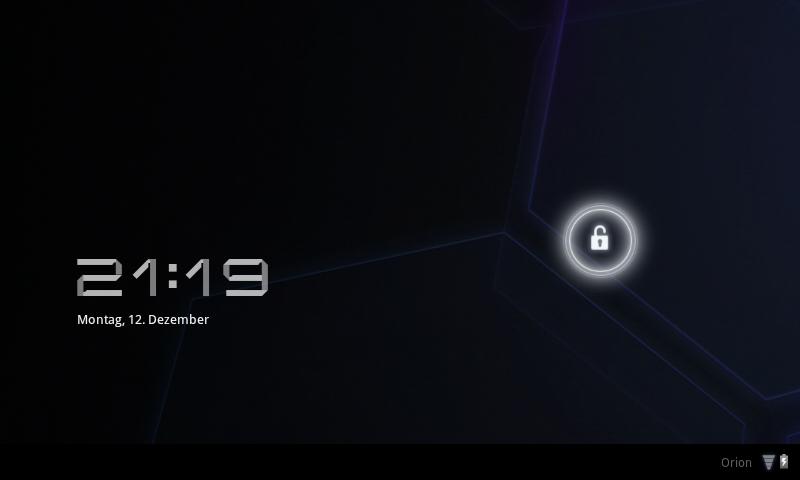 Just drag the close to the right border to unlock Android desktop. If it went well, the whole Android Honeycomb desktop (as shown below) will be visible. 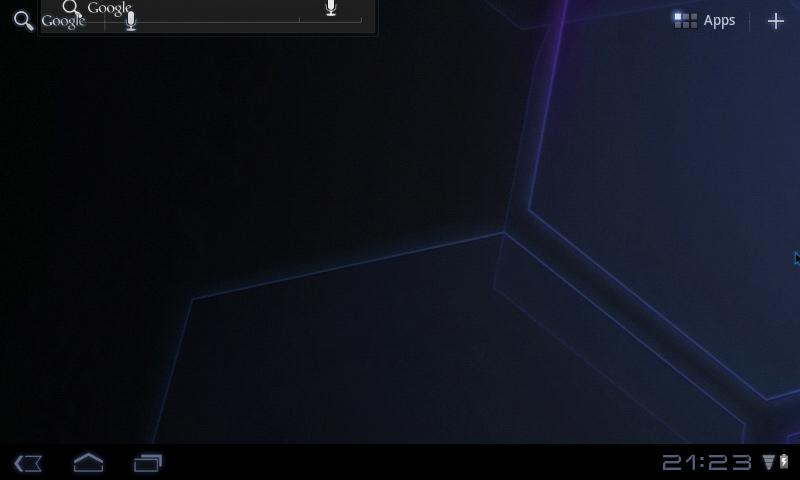 It's important, that the 3 buttons in the lower left corner are visible. If that is true, you could use the Apps icon in the upper right corner to access the app page. After selecting the icon Settings, the settings should be accessible.

The disadvantage of the solution discussed above: The settings made in Grub boot commands are dropped during each reboot. How can we change menu.lst entries to be permanent? It's a bit tricky, because Android write protects system folders and files. Somebody in the discussion thread [b] mentioned a possible solution.

After the GRUB menu shown below is visible, select the entry Android … (Debug mode) using the cursor keys and press Enter to invoke the command.

Then you sould see a couple of debug status messages on the screen. As soon as the following message is presented:

press key combination Ctrl+C to interrupt the boot process. Then you should be able to enter commands in Korn shell. The following command:

mounts the directory /mnt as writeable. Then you may invoke Linux editor vi using the following command:

It will open menu.lst, a file that contains all Grub settings. 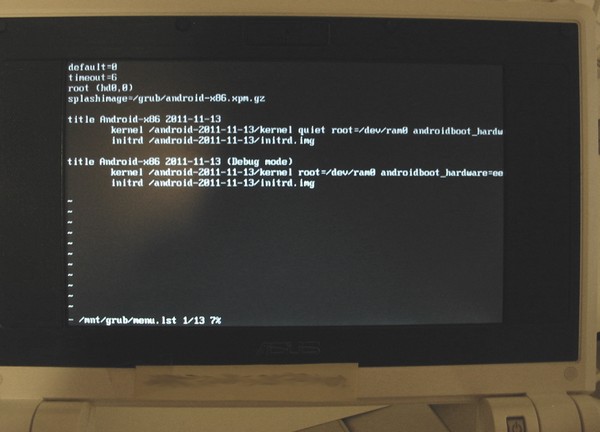 Note: If you use a foreign keyboard, take care that Android uses an Englisch keyboard layout – in [c] you will find a drawing of English keyboard settings. After invoking the editor vi, we can change settings. Some people calls vi an editor, I would name it a bad disease. If you also struggles with vi, [d]  lists some vi commands.

After saving all changes and quitting vi, you should be back to Korn shell prompt. Enter the command exit and press Enter to boot Android. I have to reboot once, because my system doesn't shows a mouse pointer during first boot. After that first reboot, you can boot Android in the common way, because the DPI settings are permanent now. You should be able to use Android Honeycomb on your Eee PC 701G. It's amazing, Android x86 3.2 supports touchpad, a screen resolution of 800 x 480 pixels, sound, a fake sd card and also Google Market is working. Only my web cam won't show an image on Eee PC 701 G. So I can further use my Eee PC 701G and I have a nice machine to experiment with Android Honeycomb.

Tip: Some apps forces desktop in portrait mode. Therefore I recommend to disable in settings –> display the "automatic display turn" option. Although it doesn't help in login procedure to Google market, it might be valuable for other apps.

And here is a video, Honeycomb running on my Eee PC 701G – not the best video quality, but sufficient to get a first impression about the possibilities.