Windows 8 To Go with Dual-Boot

… and how to get dual boot?

After copying the 2nd Windows 8 instance to the USB 2.0 hard disk, the disk was still booteable. But I could only use the 64 Bit version of Windows 8 To Go. My first idea was, to install EasyBCD 2.1 on the booted Windows 8 To Go and edit the boot menu entries. During Easy BCD install I got a few warnings concerning some .NET components. But at least I was able to launch EasyBCD and extend my boot menu.

Unfortunately my approach didn't work well. First of all, a metro style "boot menu" with two entries was shown. Not an optimal thing in my view, because the old windows 7 style boot menu fits much better. But this was more or less a "cosmetical issue". The bigger issue: During first boot, Windows 8 To Go (64 bit version) reported a serious problem. I let the computer repair fix the problem. After next boot, I have had a metro style boot menu with one entry. My attempt, using Windows 8 function, to inspect the boot menu settings indicates two valid entries. How odd – something went terrible wrong. 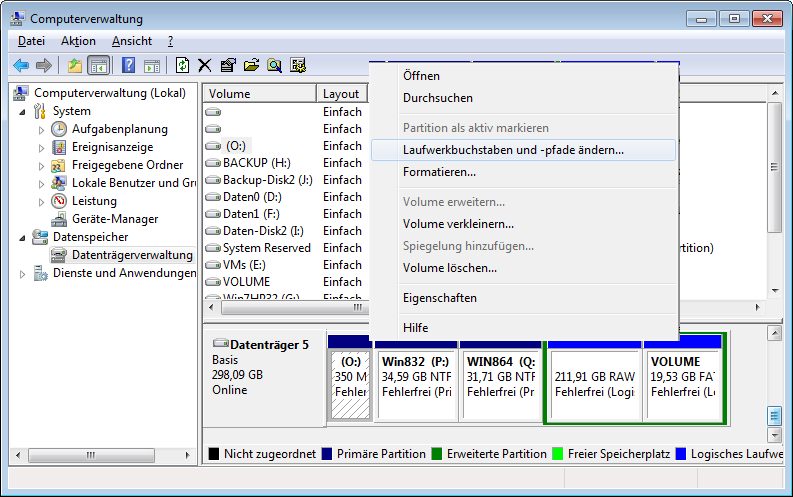 We will see the partitioning scheme of my USB 2.0 hard disk: There is a 350 MB hidden partition ("system-reserved") for start files. And we have two additional partitions containing Windows 8 To Go (32 & 64 Bit) installations. I've created also a secondary partition, containing a FAT32-drive for test purposes.

After right clicking on a partition, a context menu provides an entry to assign a drive letter. After assigning drive letters to the first 3 primary partitions, thouse drives are accessible in Windows 7.

Finishing the steps above allowed me to inspect the contend of all logical disks. First of all, I need to inspect the (hidden) start files on the system-reserved partition. To show hidden and system files, click the button Organize within a folder window. Then select the menu entry Folder and then search options (Ordner- und Suchoptionen). On the View tab (tab Ansicht in my German windows), unselectthe option to hide protected system files. 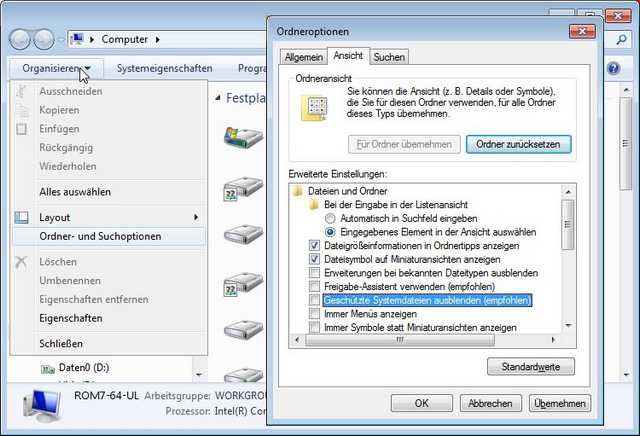 It is also mandatory to selected the option to show hidden files. In an additional step I then renamed all start files (Bootmgr, BCD) on all 3 partitions (an other approach could be to delete thouse start files).

In a third step I launched EasyBCD (now under Windows 7) to update the boot menu and re-write the boot files. Unfortunately there is one problem: BCDEasy maintains default the boot entries in the BCD store of the currently booted OS (in my case this was Windows 7 on the host computer). 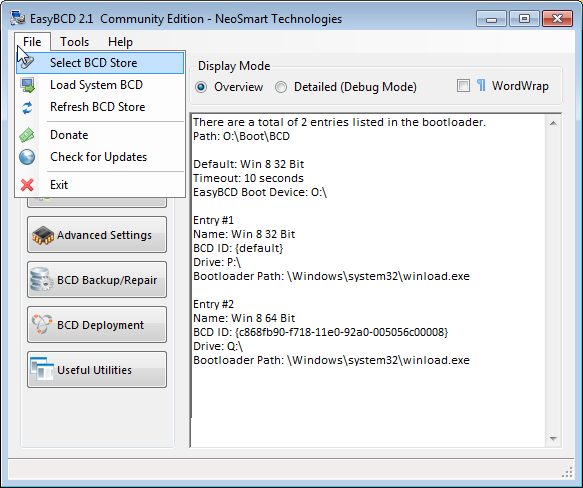 The solution: open menu File and select the entry Select BCD Store. After confirming a security dialog, a dialog window "Browse for File" will be shown. Within the dialog windows we can select the file BCD. 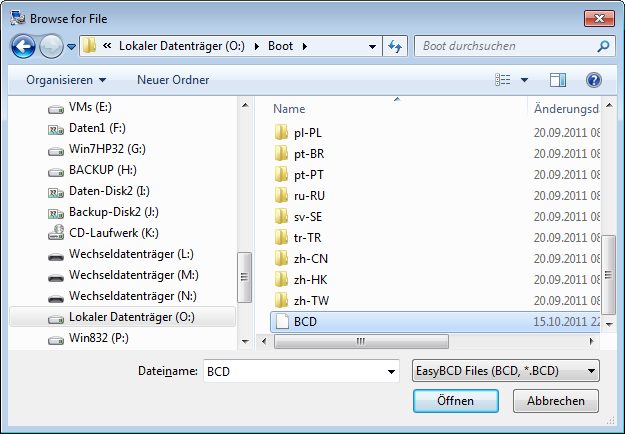 There is only one pitfall: The dialog box shows no BCD store, although I have enabled viewing system files. My solution to overcome this issue: I clicked the address box and entered the path (in my case O:\Boot\) into the adress line. After pressing the enter button, I was able to select the file BCD and click the Open button.

Now I have had access to the BCD-Store located on the USB 2.0 hard disk. In additional steps I added in EasyBCD the two drives containing my Windows 8 to Go installations to boot menu. And I used the EasyBCD option to re-write a new Master-Boot-Record (MBR) – which overwrite the old Windows 8 start files.

After closing EasyBCD I shut down Windows 7, removed the USB 2.0 hard disk and used this device to boot a netbook from this media. The metro boot menu was gone, and I have had the old Windows 7 text enabled boot menu. And I was now able to select either my 32 or my 64 bit Windows 8 To Go version. 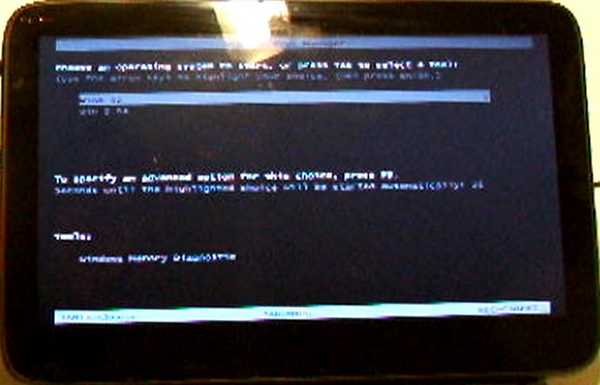 (Windows 8 To Go boot menu on a slate)