[German version]Here I reported, that Google has released android 4.0 (Ice Cream Sandwich) source code to the public. It is known since months, that ICS is also optimized for x86 architecture. Therefore it would be only a question of time, until the first Android x86 port of Ice Cream Sandwich would be available …

Build your own Android-x86 ICS …

Today I stumbled upon a twitter entry from a japanese guy pointing to his japanese website. This guy reported how he manged to downlaod the ICS sources and using Ubuntu 10.04 to build his own image for Virtualbox x86. Here are the commands to set up a build environment in Ubuntu 10.04:

After setting up the environment, the souce files can be obtained using the commands below.

Note: Some commands are using two lines for formatting purposes – but it is online on command. If in doubt, please consult the japanese site linked above.

The japanese user mentioned, that he has to start the downloald several times, because the google server has a lot of traffic.

After successful download, we can use the following command to build a Virtualbox image.

In a discussion thread in XDA forum, somebody reported that the build process took 19 hours – so please be patient (I havn’t tested it yet). The make script creates a .vdi file ready to be bootet in Virtualbox.

The japanese user give a few additionals adices, how to set up Virtualbox, on his website. He also presented a few screen shots and a Youtube-video for proof.

If you haven’t the time (like me) and the experience to build your own Virtualbox image, it would be prefereable to download a ready to use image from internet. Unfortunately Android-x86.org project hasn’t released an ICS version. But I found this thread in XDA developers forum. A guy mentioned that he has build ICS for Virtualbox and he pointed to this webseite. Gregory Strike presented on this site his first successful Ice Cream Sandwich build for x86 platforms. And he uploaded his build to the internet. So at least I was able to download a Virtualbox image file. After unzipping the .vdi file, I was able to mount and boot it in Virtualbox.

After booting, the Ice Cream Sandwich lock screen is shown, and you need to enter pin code 1111 to unlock. Afterward I was able to access ICS Android desktop in Virtualbox. Below are two screen shots of my desktop an my app page. 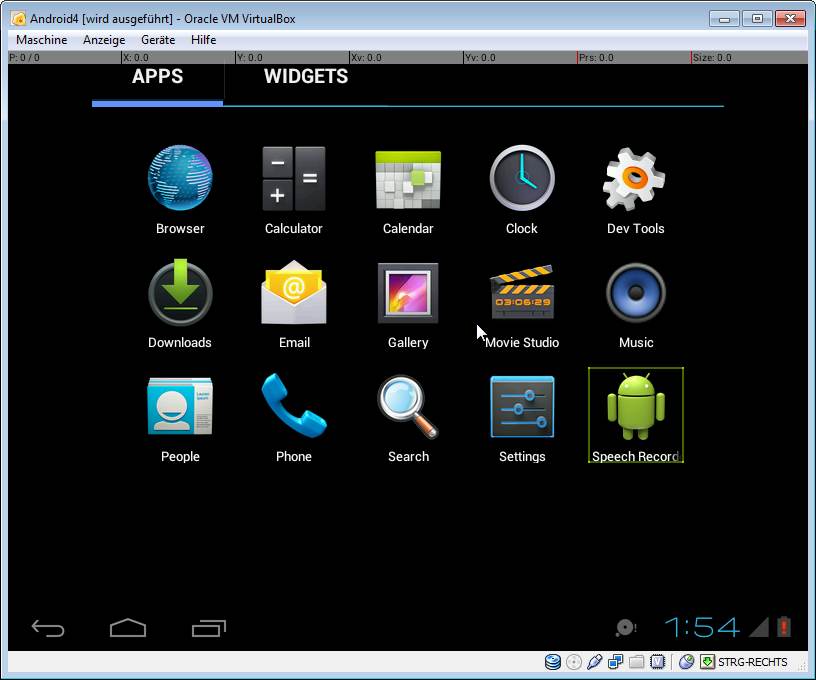 This build was booteable, but I have had no mouse nor network support. You need to use the keyboard (tab, esc and cursor keys) to select some items. According to some discussions in XDA developers forum it’s mandatory, that the host system supports VT (VT-X). The build from the japanese guy, I mentioned above, already contains network and mouse support (as it is visible on the video). So I think I need to build my own Virtualbox ICS version – until somebody else will do that and shares the result with the public …