Windows 8: A cure for To Go Workspace Bug

[German edition]Windows 8 Enterprise supports Windows To Go on USB devices – I have blogged several times about that. But most users are going with Windows 8 Core or Pro, where Windows To Go has no relevance. Nevertheless some users are reporting, that Windows 8 is causing serious trouble with Windows To Go workspace. Some are recognizing, that Windows store reports, that it won't allow app installing in a To Go environment. Others recognized some "freezes with reboots", after removing a USB thumb drive (and a message, that "Windows to go media only may be removed after shutdown"). Time for the doctor, a diagnosis and a cure.

I've had a couple of users in German Microsoft Answers Forum, reporting "Windows To Go workspace" issues – although they are using Windows 8 Pro as an upgrade from older Windows versions. I've had no clue, how to cure it – only a few quackery hints. One was to enter "to go" in the start screen's search box – launch the Windows To Go workspace start option wizard and set the option No – to force Windows 8 not to use Windows to go workspace environment. Below is a screenshot of my German dialog box. 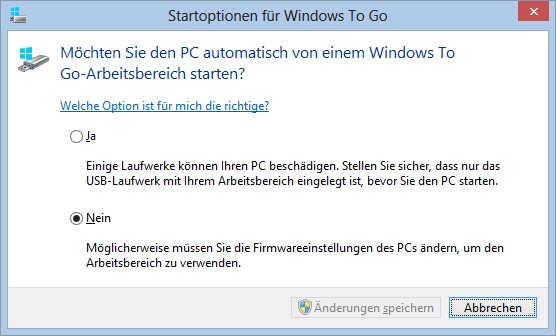 But some users are reporting, that they can't change this option. Some of them took a "radical cure" and did a PC refresh, resetting Windows 8 to factory settings.

Quackery: A short registry hack as a cure?

Later on I got a feedback from a user, who has had a call from MS support. They suggested to reset the value within Windows 8 registry, using regedit. Here is a step-by-step guide, how to survive in several scenarios.

After closing registry editor, the option No should be marked in dialog box Windows To Go workspace. After rebooting, the problem should be solved  – or maybe not – or it will come back soon …

The cause of the bug – the bad and the ugly

The guys from MS support gave us a hint, what causes this behavior. If the user mounts an USB storage device (USB stick, USB disk), and if this media has the same ID as the internal hard disc, Windows 8 has a conflict. If the device ID is found twice during system boot, Windows 8 assumes a "Windows To Go" environment – and falls partly into To Go mode.

That's the reason, why I called the registry hack shown above as a "quakery". Although the hack seems to be a fix, the bug may be happens again, if an USB storage device will be re-connected to a Windows 8 computer. To overcome this behavior, a solid cure is mandatory. The solution: Assign a different device ID to the USB device – but be aware, this will wipe your USB storage.

Just use the commands in blue (the other words behind " are comments). Press enter after each command. It's important, to select the right disk, because clean wipes the disk.

Afterward you need to use computer management and disk management, to re-format the drive. During formatting, a new unique device ID will be assigned. But I have no clue, whether this new device ID will collide with other Windows 8 systems, if the USB device is connected to this system. I guess, Microsoft needs to investigate this further and release a patch.

1 Antwort zu Windows 8: A cure for To Go Workspace Bug