I stumbled upon this update on Nov 21. 2014, after I decided to shutdown a Windows 7 machine in early morning. Because I was surprised about another "out of the band" update, I have had a look into my update logs. 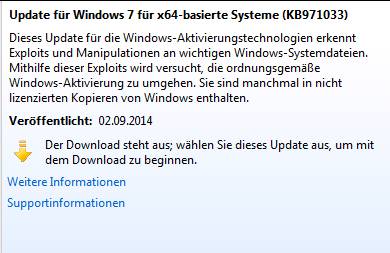 I found a Windows Activation Technologies Update for Windows 7.  Consulting Microsoft's website for KB971033, it informs me about the purpose of this update: 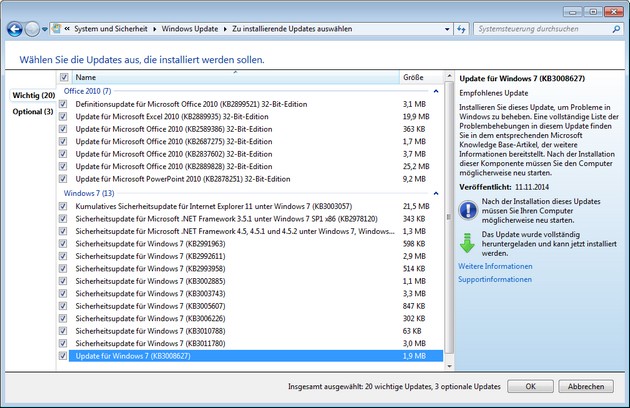 Its from a German Windows 7 system and shows the Update description obtainable in Windows Update before Update installation. The publishing date is September 02. 2014. So why this update on Nov. 21. 2014? I searched the web, but wasn't successful to find an explanation. Therefore here is my own explanation: Just two weeks ago I noted on my paper sheet, were I collect topics to cover within my German blog "have a look at Windows Activation Technology". That's because I 've seen a couple of Windows 7 users in Microsoft's Answers Forum, shouting about a non genuine Windows 7. Even, if they bought a legal copy or run OEM system, didn't change something within their systems. The only thing I identified in common: They have updated their system after November patchday.

So my theory is: The out-of-band update KB971033 fixes some incompatibilities in Windows 7 kernel, caused by November Update. And also make some kind of anti piracy strike against hackers as a side effect. Searching the web, I found serveral russian and chinese sites discussing, how to remove KB971033 to keep Windows 7 piracy copies activated. Any further thoughts about dat?